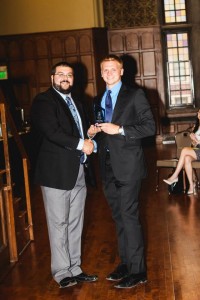 National awards are received annually by the national Sigma Alpha Epsilon Fraternity consisting of over 245 chapters and colonies.

Purdue University awards are received by various offices and organizations within Purdue. Some awarding bodies consist of Purdue Fraternity, Sorority, and Cooperative Life Office, the Office of the Dean of Students, and the Student Activities and Organizations Office.

"(On SAE): It was absolutely the best time of my life. It made me into a man and gave me the confidence to succeed."
‐ Daniel Vinovich ’87