For Charlie Ashing ’59, Leadership and Communication 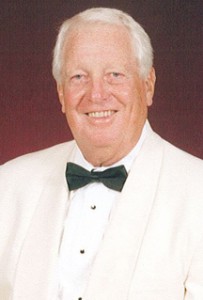 The first time Charlie Ashing ’59 set foot inside the Indiana Beta Chapter house, he hadn’t made a decision on which fraternity he wanted to join. Due to a late decision to enroll at Purdue University rather than Ohio State, he found that there were no rooms available in the residence halls. Leslie Graham ’57 read that Charlie had decided to enroll at Purdue and would play basketball. “Les came to my house, explained what ΣAE was all about, and invited me to stay at Indiana Beta during recruitment. He told me that I was free to rush other fraternities while staying at the house and I did just that. After visiting other fraternity houses, I knew ΣAE was where I wanted to be. One thing that impressed me the most was that out of the 41 fraternities at Purdue, ΣAE was the only fraternity who said that their goal was to be in the top four, both scholastically and in campus activities. It was obvious that ΣAE had a good selection of pretty sharp men.”

A particularly fond memory of Charlie’s is when Louis Armstrong came to the chapter house. “One year at Varsity Varieties, the University brought Armstrong and his band in for a concert. As a method to raise funds for United Way, the University auctioned off the opportunity to have Armstrong perform a private show at your fraternity, sorority, or residence hall. Our house president organized an effort to raise the money for a bid. I never thought we would win, but lo and behold we did! At about 10 p.m. two large Greyhound buses drove up our driveway and were greeted by a large sign that was hurriedly painted which read, ‘Hi- Ho Satchmo.’ He performed for about three hours, which prompted us to ask the dean of women for approval to extend the women’s hours. It was a great experience.”

After earning his degree in mechanical engineering, Charlie interviewed with and was offered positions at Procter Gamble, General Electric, AT&T, and Raytheon. He decided it would be more fun to make jet engines than soap, so he accepted an offer from GE, where he worked for 42 years. “At the time of my retirement I had the responsibility as the quality leader for GE Aircraft Engines’ domestic and international business. It was a great company and a fun business.” In 1998 Charlie was asked to join the board of directors for Performance Review Institute, which establishes quality standards for aerospace companies and confirms their compliance. In 2001 he was elected chairman of the board.

Charlie’s career path was greatly influenced by his time at Indiana Beta. “I would say that those years were some of the most important in my early life. It was a very maturing experience being from a small city and living with brothers from New York, Chicago, and Los Angeles. I attribute much of my life’s success to the communication and leadership skills that it took to live with 70 men from various locations and walks of life. I experienced seeing men doing what my father told me, ‘Leaders are not born; they, like athletes, have to develop that talent.’ The upperclassmen were great role models by being excellent students, good leaders, and hard workers. Our house board was made up of distinguished people such as Purdue Alumni Association Secretary Etheridge Baugh ’23. They were good businessmen.

”Charlie felt that one of the most important tasks as a fraternity member was to recruit new brothers and feels that this is still the most important task for today’s members. “We need our alumni to step up and repay the debt to Indiana Beta by contributing to our brotherhood, which has been so important to each of us personally. Wayne McIntyre ’64 is an excellent example of repaying that debt by putting many hours and dollars into the house and the current rush activities. He has made a big impact on our chapter’s turnaround. Fred Richter ’60 has spent hundreds of laborious hours getting Indiana Beta physically back to where we want it. Kevin Dolen ’91 and his wife have contributed many dedicated hours to our house to keep it alive.

”Charlie has been married for 53 years to his wife Deanna, a Kappa Alpha Theta from OSU. “Living with a Buckeye should earn points in heaven.” They have three married children: Leslie Ann, Charlie IV, and Kriss, and six grandchildren, including Charles V.

Charlie is quite active. He sits on the governing board of his church, is president of his high school alumni association, golfs, sails, and is active in Interfaith Hospitality Network for homeless and jobless individuals.

Football games and reunions bring Charlie back to the chapter house. He also gets together annually with brothers for Founder’s Day in Florida. “Some of my brothers are still my best friends and we communicate regularly.” Contact Charlie at ashing@fuse.net.